The curse of the crying boy comes from numerous house fires in the U.K. starting in the 1950’s when a series of paintings made by Giovanni Bragolin were widely distributed and available until the 1970’s.

The paintings are blamed for multiple fires that would devour the entire household, leaving everything in ash except for the painting. Bragolins ominous pictures of crying children were doubted at first, but as the house fires continued the rumor began to gain momentum. One of Bragolins paintings portrayed a boy named Don Bonillo who accidentally killed his parents in a house fire, and wherever the poor child went after the incident, the flames would follow.

People began to wonder about the mysterious creator of these cursed paintings. At the time, the only thing known about the origin of said paintings was the signature. What was found of the paintings creator was largely speculation and rumors, but supposedly Bragolin was actually Franchot Seville. Later, a journalist named Dr. David Clark researched the blazing painting and its creator only to reveal that Bragolin and Seville were pseudonyms for the Spanish painter Bruno Amadio. 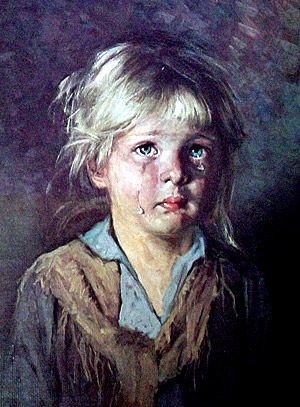