For the past five years, the football team has seen quite a bit of turnover at head coach. We’ve seen coaches come and go; some quicker than others. That’s okay though because this year is different. This season we have coaches who are willing to buy into MCHS just as much as the students. As the saying goes, “Good things come to those who wait,” and already this football season, we’ve won three games and have only lost one. That’s a big deal. We’ve won more games this season than we have the past three seasons. Combined.

According to Mr. Wilkie (the last MCHS football coach to have a winning season), a big part of this year’s success has been the new head coach, Kellen Hoover and his staff.

“This team we have now reminds me of the teams that I coached,” Wilkie said. “They compete hard. They do things right, so they can be the best that they can be. What I like about Hoover is how positive he is. He cares about the kids and he does a great job of putting them in a position to be successful.”

Coach Hoover came from Monett, a team that won state in Class 3 last season. After coaching for a successful team, he came all the way out here to help a team that has found little success the past decade. If you ask me, his decision to come here was as brave as it gets, but according to Coach Hoover, he knew Mustang football could be successful before he even held his first practice.

“Our goal, as a program, is not to have a certain number of wins and losses but to help prepare these men for their futures as husbands and fathers.” – Coach Hoover

“Being at Monett I knew the type of players the Mustangs had to offer because they were in our conference,” Coach Hoover said. “I figured with the lack of success they had previously that they’d be hungry for it. I was right. Our goal, as a program, is not to have a certain number of wins and losses, but to help prepare these men for their futures as husbands and fathers.” 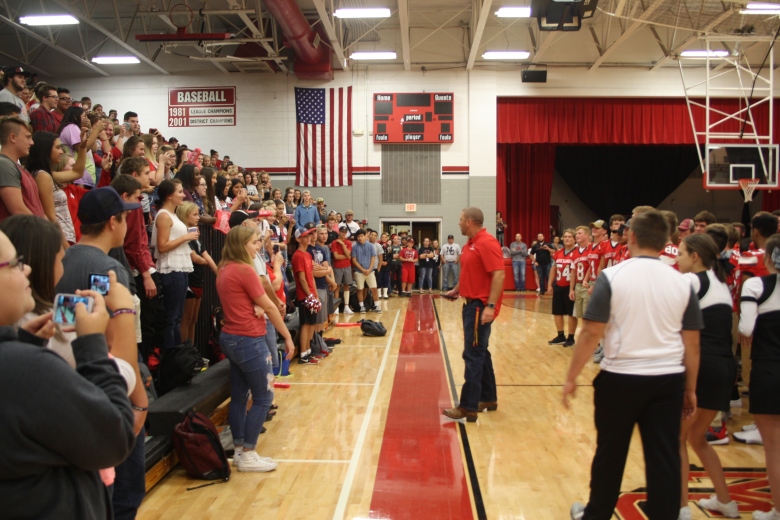 Coach Hoover is not the only coach committed to character, but the rest of the staff has also been emphasizing the importance in this cultural change as well.

“Our program is all about we and not me.” – Coach Collins

“We are hoping to change the football culture and hope to build some individual character amongst our players,” Assistant Coach Collins said. “We worked hard all summer, stayed united even when things got tough. Our program is all about we and not me. It’s all about each other.”

If you haven’t heard tonight is Homecoming. Let’s go out and help the boys represent. Be loud. Obviously, Coach Hoover loves the student section, but make him love it even more tonight. We’re all in this together. When in doubt remember this, “I got yo’ back.”

Are you going to Homecoming tonight?